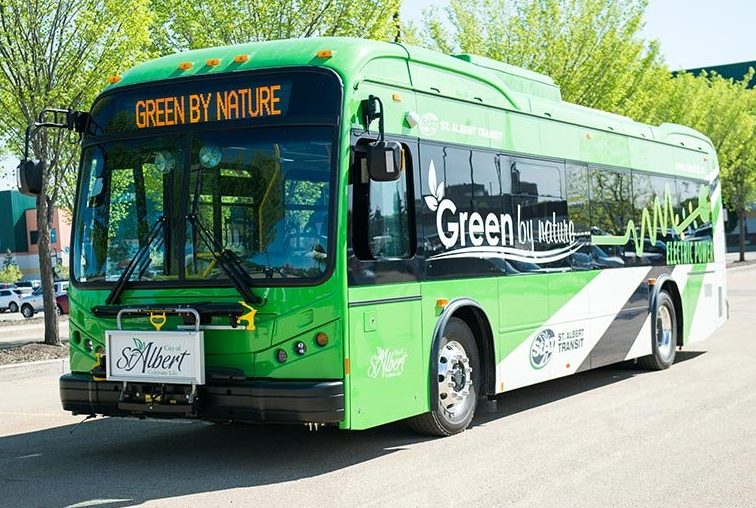 The city was the first in Canada to have electric buses serving full-time transit routes; officials say environmental and economic benefits have been significant

The city of St. Albert, Alta., has been recognized for its efforts to electrify its public bus fleet with an Emerald Award, one of the province’s most prestigious environmental honours.

The city of 66,000 currently has seven electric buses in its fleet, with four more on order and plans in place to have an all-electric fleet by about 2033.

The Emerald Awards are given by the Alberta Emerald Foundation to 12 people or organizations annually for “outstanding environmental achievements.” This year’s award consists of a certificate and a $2,000 grant, which city officials say will be put towards a future environmental initiative.

“We are so pleased to be recognized for our electric buses that we are so very proud of,” said St. Albert Mayor Cathy Heron.

The municipality’s electric bus fleet was also recognized in 2018 with a Minister’s Award for Transportation Innovation.

Ahead of the curve

St. Albert’s history with electric buses dates to 2014, with the establishment of a short-term trial program which determined that electric buses would be $632,325 cheaper to operate over their lifetime than their diesel counterparts.

In 2017, it became the first municipality in Canada to have full-sized electric buses serving regular transit routes. The first three buses purchased cost $962,000 each, two thirds of which was paid for by GreenTRIP, a program through which the government of Alberta provided $2 billion towards expanding public transit projects.

That same year, the city installed 250 kilowatts of solar panels onto the transit garage where the buses are housed. The panels provide 20 per cent of the facility’s energy needs, reducing the environmental impact of the buses even further.

The electric buses currently produce half as many greenhouse gas emissions and 100 per cent less tailpipe emissions than traditional buses. Other benefits cited by bus operators include the reduced noise of the vehicles and increased ease of driving.

Aside from reducing St. Albert’s carbon footprint, the buses have also been a great investment for the city. According to a city spokesperson, the buses cost 47 per cent less to fuel than diesel buses and have saved the city about $123,000 in energy costs so far.

According to Gregory Casswell, executive director of the Emerald Foundation, St. Albert’s bus fleet “shows strong leadership not only within our province but within our country.”

“If St. Albert is able to do it, why can’t other communities do it?”

Other Canadian cities with battery-electric or hybrid buses in their public transit fleets include Guelph, Montreal, Toronto, Vancouver, Victoria and Edmonton. As with St. Albert, several of those projects received financial support from the federal and provincial governments.