From bus washer to transportation boss, Prince George Transit GM worked his way to the top 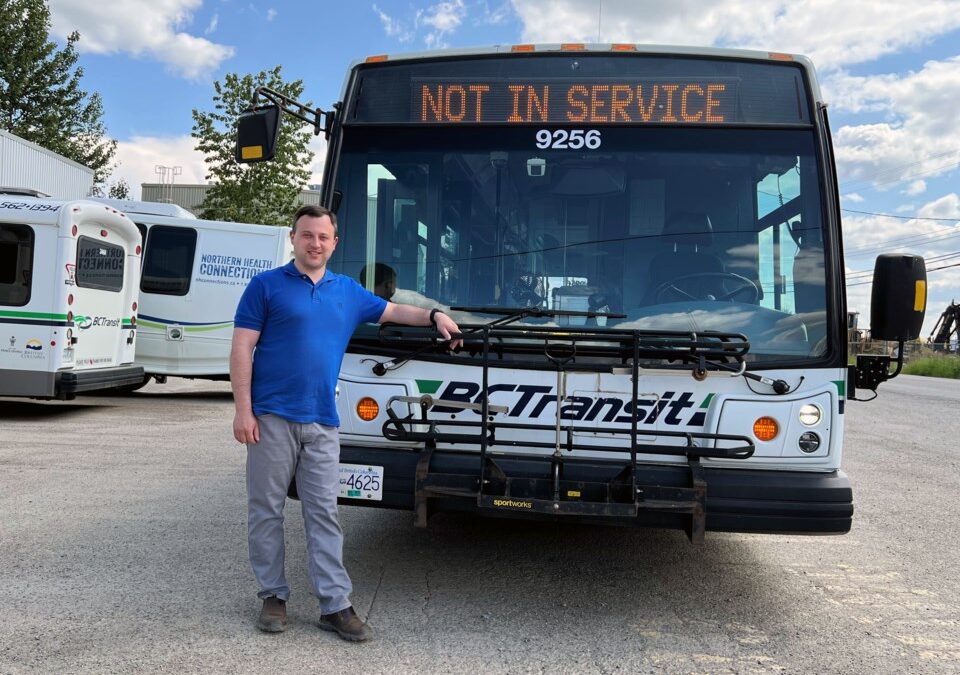 Bus drivers are in high demand right now with more positions than there are drivers willing to take on a new job.

So if you‘re looking for a career that demands compassionate people skills with the ability to move passengers safely from place to place in all weather conditions, Denis Litvinov would love to take a look at your resume.

From bus washer to driver to supervisor to his current job as general manager of Prince George Transit, the 33-year-old Litvinov has virtually done it all in his climb up the company ladder, which started seven years after he left his roots in Russia to come to Canada.

“The transportation industry has had a shortage of drivers since COVID started and I don’t really know what caused it, but it’s like the labour market disappeared, it’s bad,” said Litvinov.

“I think it’s unfortunate a lot of young people are not choosing the transportation industry. It’s not deemed as cool. Everybody wants to be a welder, carpenter or work in the oil fields but not enough young people consider transportation as a career choice for them. We offer good money, there’s pension plans, good benefits, there’s overtime. It would be great to see more people coming out of high school.”

As the big boss at P.G. Transit, part of Pacific Western Group of Companies, Litvinov oversees a staff of 65, including 47 drivers now fulfilling the B.C Transit contract to provide the city bus service on 18 routes. He says he’s willing train anybody with a Class 5 licence to learn what it takes to drive a bus.

“We could easily take eight new drivers,” he said. “You have to have willingness and an ability to work with the general public. It’s a person who is there to serve people, somebody who is helpful and willing to answer questions and somebody who prioritizes safety.”

Litvinov was 12 years old in 2001 when he left his home in Voronezh, Russia to move to Prince George, where his mom could continue her relationship with a man who lived in the city. Denis was already studying English in school and he and his mom spent a year working with a tutor to develop their language skills before they came to Canada.

Having grown up a team player as a basketball player in Russia, Denis made friends quickly in his new surroundings in Prince George and became a provincial-level wrestler at high school at Kelly Road Secondary School. After he graduated, his dream job was to be a truck driver hauling chips to the pulp mills and he got his Class 1 driver’s licence. But none of the local companies were hiring at that time, so he took a job with the Carefree Society of Prince George as a HandyDART driver, providing bus service to seniors and people with physical and mental disabilities.

“That was a great job, really rewarding, you serve a type of customer that is very appreciative of the service,” he said. “I like interacting with the public and being on the front line. I actually enjoy driving a large vehicle. There’s a change of scenery and instead of sitting in the office you’ve got this massive window in front of you get to see through.”

That led to a part-time job with Diversified Transportation in 2009 cleaning school buses and the full-sized buses used to transport patients to hospital appointments. He knew he wanted to work for the company the day he saw a brand-new motorcoach pull up to the yard driven by an immaculately-dressed driver in his shirt and tie and uniform. He got behind the wheel for short-haul routes filling in for drivers who were sick or on holidays and his workload gradually increased. Diversified sent him to Pacific Western’s Centre for Innovation and Excellence driver training school in Edmonton, where he was mentored by a professional driver who taught him the ropes of driving a motorcoach.

Litvinov was 23, drawing double-duty as a driver with two companies – Diversified and Prince George Transit, when one of his location managers asked if he would be interested in a management position. He declined, at first, but thought about it for a while and had a change of heart. He was sent to a charter service in Mississauga, Ont., to complete Pacific Western’s management internship program, which gave him hands-on experience working three-month stints in all the major departments – operations, maintenance, financial services and sales – to give him an understanding of virtually every job in the organization.

The second phase of his training was a temporary job placement in 2015 to work as a driver during the Canada Winter Games in Prince George, followed by a six-month assignment that spring/summer as a transportation manager at the 2015 Pan Am Games in Toronto. His job at the Pan Am Games was to oversee arrivals and departures of athletes, coaches and officials at Toronto International Airport. He also worked on logistics for the Para Pan Am Games that followed in August.

“That was the experience of a lifetime, participating in something so large was incredible,” said Litvinov. “It’s not something people get to do very often and it’s a very exciting place to be. It was months of planning, all for about three weeks of work.”

Litvinov then assumed his first permanent management position as a supervisor with Diversified in Prince George. Coming back as one of the bosses for people in the company who first knew him as bus washer and aspiring driver, Litvinov had no trouble gaining their respect.

“They were really supportive – drivers were working with me and we were there for a common goal, to deliver the service and it was great,” said Litvinov.

He worked there for nine months until Diversified won the contract to provide a new city bus service in Fort Saskatchewan, Alta., and as the manager it was his job to work with the city to develop ridership, represent the company at community events and advertise the service and he was there for 2 ½ years. He was promoted to general manager for Peace Country Transport in Dawson Creek and that led him back to his roots in Prince George last August when he became GM of Prince George Transit.

Litvinov visits his family in Russia almost every year. He and his wife Elena (Ellen) grew up close to each other in Voronezh and she now works in Prince George as a professional photographer and full-time mom to her six-year-old son.